Sip and Savor the bounty of the Olympic Peninsula the whole weekend of October 7 - 9.

Consider base camping and $avings at Old Alcohol Plant and 7 Cedars so you can experience both Apple and Cider Fest AND Dungeness Seafood & Crab Festivals.

Apple and Cider include tastings at: Finnriver, Alpenfire, Eaglemount and more.

There will be a 21 and over "Fire party" afterparty at Propolis with Captain Peacock, Hook! and others!

CrabFest is held outside and is spread out on 3 open acres of Port Angeles waterfront including the city pier. We have several areas under cover but open, with lots of “natural” airflow.

It’s not just about the food! There’s plenty of other fun to be had during the festival. The Grab-a-Crab Derby is fun for kids of all ages — even if you’re only spectating! You’ll find great music at the First Fed Crab Central Pavilion. Over 75 craft, merchant, sponsor, nonprofit and food booths on City Pier, and more.

This year the hotel is offering a Special Crab Festival and Lodging Package Deal. The 7 Cedars Hotel offers plush rooms with expansive views and a customer experience that is unmatched on the Olympic Peninsula. Click Here For More Info
Open your current issue of Northwest Travel & Life Magazine and embark on a delicious journey around Washington’s Olympic Culinary Loop, where seafood, wines, ciders and farm-fresh goodness all come into play.
We love the delicious coincidence that their cover matches our new Culinary Loop MAP too!
Find Food Traveler 2019 in our July/August issue of Northwest Travel & Life, on newsstands now. Pick-up or order your OCL MAP today!

Thanks to Erin of Sip Northwest Magazine for sharing each savory step.

"Port Townsend, Chimacum, and the Olympic Culinary Loop have plenty more to offer, depending on any and all tastes." We couldn't agree more!

Explore this wonderful new map featuring many of the Chimacum Valley Farmstand & Markets.

Jefferson County Farmers Market, Chimacum Corner Farmstand and the Port Townsend Coop sell. The Fireside Resturant, Finistere and others cook up the YUM! The Keg and I pours it.

Visit the farms that grow it all! Download your own Chimacum Valley Farmstand & Markets map

Must see (and taste) stops include: 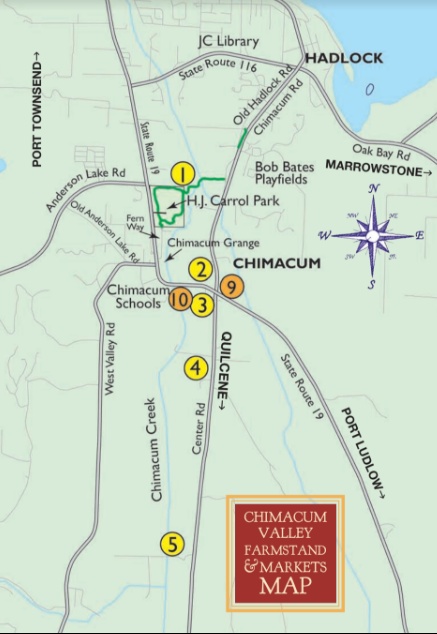 A great tribute! Bedford's NW Soda was asked recently to create a new flavor for the 100th anniversary of the Lake Crescent Lodge, which is located on the beautiful Olympic Peninsula in the Olympic National Park in Western Washington State. Marionberry Crème was created with the label commemorating the 100th anniversary of this beautiful historic lodge, which sets on the shore of magnificent Lake Crescent. Ed Bedford worked with lodge staff to create the flavor and the label. Lake Crescent Lodge was recently rated as one of the top lodges in the U.S. Park System. The product was introduced at the lodge’s May 1st 2015 opening. Many have already inquired if the Marionberry flavor will become a permanent addition, joining Bedford's fine soda line up? Stay tuned…

SAVORING CHIMACUM VALLEY, photo by Resort at Port Ludlow[/caption] The Fall 2013  issue of  Northwest Travel Magazine.  Continues to celebrate our compelling and inspiring details on the Olympic Peninsula Culinary events! This time savoring Chimacum Valley! Yum! Read all about it!
follow & connect
like & share!