A year-long effort to find the quintessential Olympic Peninsula Chowder will culminate at this weekend’s Dungeness Crab & Seafood Festival.

The 18th annual CrabFest — scheduled for Friday, Saturday and Sunday at City Pier and in the parking lot of the Red Lion Hotel at 221 Lincoln St. — will host this year Olympic Culinary Loop’s final chapter in finding and honoring the seafood chowder that best exemplifies the Olympic Peninsula.

The judging of the champion chowder will be at about 3:30 p.m. Sunday in the Front Street Gateway Center Pavilion.

“No longer will the Pacific Northwest-minded foodies be limited in their ordering to chowders named ‘New England,’ ‘Manhattan,’ or seafood Cioppino hailing from San Francisco, or to Jambalaya influenced by Louisiana,” Olympic Culinary Loop's Shively said. “Once crowned, the winning Olympic Peninsula Chowder is destined to be on menus and taste buds from coast to coast” .

The chowder championship is one of many foodie events planned for CrabFest.

The main event is the crab dinner fest. More than eight tons of Dungeness crab pulled from local waters will be delivered to the plates of festivalgoers in the Crab Central tent all three days. The crab will be served with fresh corn and cole slaw.

Tickets for the full Crab meal are $30 and can be purchased in advance at CrabFestival.org. Military personnel with current active ID will pay $26 for a special crab dinner all weekend and receive 10 percent off on merchandise. Special discounts for Friday and Sunday Crab Dinner tickets can be found online.

Inside Crab Central - and out along the pier - will be other restaurant booths, adult beverages and live music.

Featured chefs include pie maker and author Kate McDermott of Port Angeles, who will offer a demonstration Saturday, and “Wild” Bill Ranniger, corporate executive chef for Duke’s Chowder Houses, of Seattle, who take the stage Saturday to reveal the secrets of creating Tempting Thai Ginger Cod in a Coconut Milk Broth and return again at 11:30 a.m. Sunday to prepare Pan-Seared Wild Alaska Salmon.

McDermott’s cookbook, “Art of the Pie: A Practical Guide to Homemade Crusts, Fillings, and Life,” was nominated for a 2017 James Beard Award in Baking and Desserts. In 2018, she released her second cookbook, “Home Cooking.”

McDermott will sign copies of both her books after her Saturday presentation.

Ranniger began his tenure with Duke’s as a chef in 1995, then rose through the ranks from general manager to regional manager to executive chef, a position he has held for the past 15 years.

With restaurateur Duke Moscrip, Ranninger co-authored the 2016 cookbook, “As Wild As It Gets … Duke’s Secret Sustainable Seafood Recipes.”

Thanks to the "Working Girls" at Olympic Cellars Winery for this "sip"sational primer on pairing holiday foods and the perfect wine! Just in time for our annual listing of just a few of the many delicious Thanksgiving feasts being prepared all around the LOOP. YUM! If you can’t visit Olympic Cellars, and  all the other OCL member wine and cideries this weekend for the annual Harvest Wine Tour, Olympic Cellars has put together a few suggestions and a three pack wine special to help you on your way.  This party pack of Dungeness White Riesling, Cranberry Jubilee and Dungeness Red is specially priced at $50.00.  Click here to order on-line.

On to the Pairing Principals!

Depending on where you are in your wine journey, the idea of pairing wine to food can be overwhelming.  This is especially true during the holidays when preparing a meal for several guests. Match Acidity with Acidity Acidic white wines, like our Madeleine Angevine have a crisp, citrusy tang. They pair well with any simply prepared shellfish, particularly oysters, but also seafood salad and vinaigrette. Acidic red wines, like our Dungeness Red Lemberger taste like a basket of fresh berries.  The acidity cuts through rich side dishes and doesn’t overpower lighter meats. Dungeness Red is delicious with a classic Thanksgiving Dinner. Offset Spice or Salt with Sweetness A slightly sweet white wine helps to cool spicy dishes.  Our Dungeness White Riesling pairs beautifully with Thai curry. Also, salty food like ham will pair well with a sweeter wine.  Think spiral ham glazed with cranberry orange sauce served with our Cranberry Jubilee. Yumm! Pair Light with Light Pork is a lighter meat, so you want to pair it with a medium bodied red wine.  Our 2014 Zinfandel is perfect with roast pork.  As a side note, Washington State Zinfandel is very different from California Zinfandel, which tends to be big and taste of purple fruits.  Washington Zin tends to be a little lighter and taste of red fruits like raspberries. These are dry red wines – not sweet Zinfandel Rose’ which is referred to as White Zin. Big Flavors with Big Red  Big reds, pair with hearty red meat.  A classic pairing is grilled steak with sautéed mushrooms and a Bordeaux Blend.  Our Winemaker’s Signature pairs beautifully with heartier foods. The tannins help balance the richness of a steak dinner allowing the flavors of the wine to shine. Sweet Wine with Dessert  The sugar in the dessert and the sweetness in the wine will balance.   My Sweet Syrah pairs well with anything chocolate, but pumpkin pie might be better with a fruitier white like our My Sweet Angevine or even Cranberry Jubilee.  Sweet Rose’ wine pairs well with creamy, mild desserts. Give Them What They Want If you know that Aunt Julie only drinks sweet, white wine, don’t bother trying to convince her that she will enjoy a full bodied Cabernet Sauvignon with her Beef Wellington.  It just won’t work for her. Pick up a bottle of something you know she enjoys and don’t wine sh 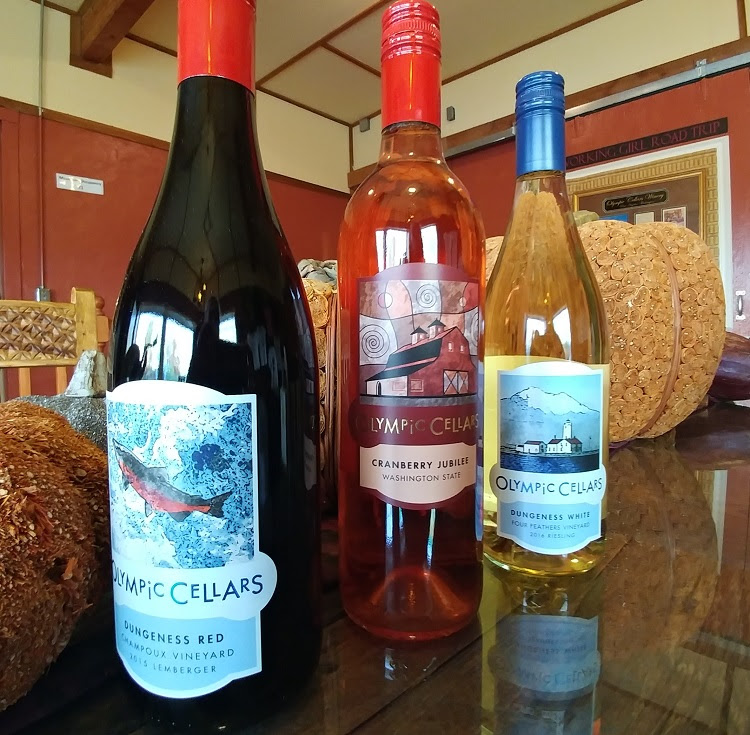 ame.
Port Ludlow's Chef Dan’s Cranberry Relish is SOOOO popular, (they sold out Thanksgiving 2015 with over 200 lucky guests!),  he's been kind enough to share this recipe

Besides drinking in the fall colors here's a quick trip of what's happening around the LOOP! As you'll see there's PLENTY to eat, see and do!  Enjoy!

October 21, Noon to 1:30PM
Everyone is invited to dine on a combo of wonderful food and great conversation at OCL's October 21 "Lunch & Learn". Early Bird sign-up savings end soon. So sign-up today!

October
QUART GROWLER BLOWOUT!!!!!Now every Tues, Wed, and Thurs, get 3 stamps on your Growler Club Card when you buy and fill 2 quart growlers!*Quart growlers are 2 full pints, perfect for that simple drink after work, or share a pint with a friend! They also act as great water bottles when not filled with beer! They tend to hold their carbonation better then 1/2 gals and their compact size fits more easily in coolers and trailer fridges!

We are in fall menu development, and these Sunchokes (aka Jerusalem Artichokes) are most likely being paired with sea scallop. Yum!

The main lodge holds much of the Kalaloch Lodge history, like this painting above the fire place. Next time you come in take a second check it out, its one of our favorite's.

October 17-18-19
Camaraderie Cellars has commissioned a play! "Vignettes" will make its debut the weekend of October 17-18-19 at the Port Angeles Community Playhouse, 1235 E. Lauridsen. This delightful comedy, written by our friend Rebecca Redshaw, showcases how wine shared with family and friends can be a connection and support through life's ups and downs. Tickets are $15 and can be purchased at Port Book & News, BrownPaperTickets.com, and at the winery. Hope to see you!

Alex and Michael putting the last bottling of Glow for 2013 and the first bottling of our Champagne style, yet to be named, very limited release (444 bottles) rose' champagne, into stillage bins for slow bottle conditioning.

October  12, noon - 2PM
Brother Townsend is rocking the market from 12-2 on Saturday. Meredith and friends are opening 10-12.

Jay has been busy planting cover crop seed and putting fields to bed for the winter ahead. In these pics, he is loading up the seeder with a blend of our farm-grown Diana Fava Beans, Triticale and Vetch. Crop rotations and cover cropping techniques improve the long term health of the soil we steward!

Sirens Seafood Bar's fresh and hot pots of our local bounty from the water. Truly an experience!
SIRENS 12 shirts are in!! $22 come and get yours while they last. Wear yours to watch the game here and get Happy Hour prices on your drinks.

Check out our fantastic daily specials!!! We've got somethin' for everyone each day of the week! What's YOUR day?? (some restrictions may apply -- please ask your server for details...)

The Resort at Port Ludlow

October 24, 6PM
We are pleased to announce our upcoming Brewmasters Dinner, featuring Hood Canal Brewery and CB Nuts. Join us on October 24th for an evening of fantastic food and delicious beer. Make your reservations today, space is limited! http://www.brownpapertickets.com/event/852680

Every Thursday in October from 4:30-6PM, guests and community members can learn how to forage for and cook wild mushrooms! Complimentary to hotel guests, $10 for non-hotel guests, RSVP not required

October 9
This Thursday Blondie’s will be is hosting its weekly flight night. This week Darci will be pouring wines from Zerba Cellars, the 2011 Pacific Northwest Winery of the Year. The flight will include Zerba’s Barbera, Cabernet Franc, and a Malbec. So please join us this Thursday and enjoy some of these fantastic wines! Cheers!
Tonight we have Nash's Organic Rainbow Chard, sauteed in Olive Oil & Garlic, with Goat Cheese, Toasted Pumpkin Seeds & Balsamic Drizzle.......yes please!

Get your self a Caramel Banana Bread latte! Its especially awesome with white coffee! $3.50/16oz
Throwback Thursday presents you with . . . Pumpkin Spice Latte, $3.50/16oz! Make it a Great White Pumpkin (add white chocolate and caramel) for $.50 more. Decadence! Have a marvelous day.

Goulash special today...try it with a pint of Kolsch from Our local Fathom & League Hop Yard Brewery yum! German specials all week for Oktoberfest

Fall is the wonderful around these parts. Oysters are firming up, water is cooling off, warm days, frosty nights and savory fungi fruiting in those hills — at Hood Canal.

Fall is the perfect time to explore mountain biking opportunities in Port Townsend. We have the closed roads of Fort Worden, varied levels of trails at Anderson Lake, Gibbs Lake, the Larry Scott trail with many single-track side trails. Enjoy the crisp air all day then pamper yourself back at the Inn.

October 17-18  - Mushroom Fest
If you fancy yourself a connoisseur of mushrooms, then you wont want to miss this fantastic fungi feast!  There will be Chanterelles, Porcinis, Lobser mushrooms, Oyster mushrooms, Criminis, Cauliflower mushrooms, Shiitake, "Chicken of the woods," Hedgehogs, and Lion Manes.

Take a trip with us to the southern side of our continent: Introducing Cafe New Day's Mexican inspired specials!Available only for a limited time, these dishes are sure to please:

Hands on cooking class with Chef Dan! Bring your favorite culinary tools or borrow ours. Class is from 11:00am – 12:30pm with a 3 course lunch to follow. Class and lunch is $49.00 Reservations required. Purchase tickets at: www.brownpapertickets.com Maximum 24 guests Full event details at: http://olympicculinaryloop.com/ai1ec_event/hands-on-cooking-class-learn-knife-skills-lunch-to-follow/?instance_id=3903 Read about this and other Olympic Culinary Loop activities at this month's "Fresh Sheet" http://us4.campaign-archive2.com/?u=1811e6acbf8815b3b14db9ae5&id=d59cc2441d&e=011d5b8d88
follow & connect
like & share!