The tides are usually low enough during this weekend for the easy harvest of clams and oysters on the public beaches near the festival, (license required) and the weather is traditionally good during this holiday weekend. This is great family fun!

Whether you are local or a visitor to the beautiful Olympic Peninsula Wineries, you don’t want to miss this exciting opportunity to visit some of the oldest wineries in the state, taste some truly outstanding wines and do a little Christmas shopping.  The Holly, Jolly Wine Tour runs from December 3 to December 19.

Purchase your tickets for this tour at one of the participating wineries beginning about November 20 (will link it here as soon as it goes live).  Each ticket costs $50 and is meant to be shared with a friend or loved one.  Each winery is giving you a special discount for tasting, glasses of wine or a special gift valued at $76.

Provide this coupon code: HJWT2021 for $5.00 off your ticket purchase.

Many of the wineries are also offering great deals on wine purchases for your holiday festivities or gift-giving.  For example, at  Camaraderie Cellars they are offering a special Holiday Dinner wine 4-pack for only $99! 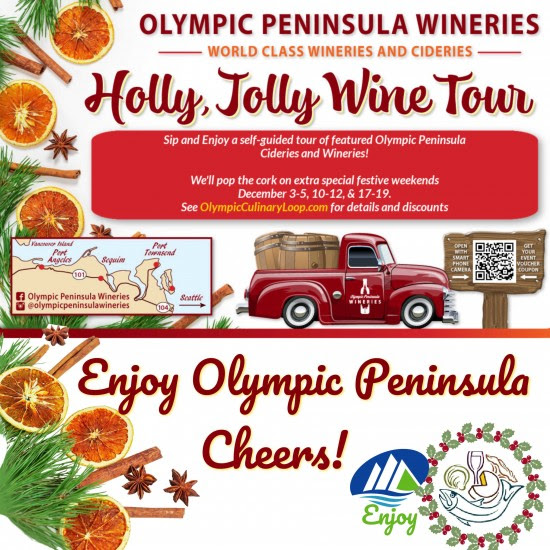 From native salmon to Dungeness crab, and shellfish - ranging from delicate calms, buttery or brine mussels and oysters, to the enormous Geoduck - our waters serve up a bountiful meal of delicious seafood to a hungry globe.
However, it isn't without cost and concern. OA (Ocean Acidification) is just now being understood by scientists, and all early indications are that it's a deadly component to Red Tide and other climate-related climates of our coasts.
NOAA's Olympic Coast National Marine Sanctuary has been recently designated as a sentinel site for the study of OA and its impacts on Olympic Coast seafood.
Why is it a concern? Climate change emerged in recent decades as a theory and is now a broadly acknowledged phenomenon with impacts demonstrated around the world.  In recent years, shellfish growers in Washington state have needed to develop monitoring and treatment practices to avoid spawning failures that have been linked to the periodic upwelling of more acidic ocean waters. In the not-so-distant future, climate change is projected to profoundly impact coastal and marine ecosystems on a global scale, with anticipated effects on water quality, sea level, temperature, storm intensity, and current patterns.
COVID contributes to seafood shortages - A recent Bloomberg News article  titled "No Crabs, No Scallops: Seafood Is Vanishing From Menus in U.S." served up the post COVID problem succinctly;

"Just like in dozens of other overwhelmed industries in the booming economy, there are any number of factors causing the shortages and price spikes: The ports are congested; there aren’t enough fishermen; there aren’t enough truck drivers; demand for seafood at restaurants is soaring."

However, thanks to collaborative partnerships and simple - hard - work, area restaurants and regional festivals such as the Dungeness Seafood and Crab Festival are well-positioned to avoid national challenges regarding seafood’s disappearance from restaurant menus due to soaring wholesale costs attributed to COVID-related port congestion, a lack of fishermen and other shortages, CrabFest is connected directly to local fishermen and suppliers with their own dedicated crab boats. Assuring visitors to this Annual Fest (October, 8-10, 2021 along the Port Angeles waterfront) that there will be fresh whole Dungeness Crab from Hightide Seafood, Hama Hama Oysters, sourced using their own 5-generations of tide flats served raw and BBQ. And additional oysters from Taylor Shellfish Farms, growing Northwest oysters since the 1890’s, and MORE!
For over a decade the Olympic Culinary Loop (www.OlympicCulinaryLoop.com) has celebrated the Olympic Peninsula's sustainable and locally grown and harvested fruits, vegetables, herbs and berries, locally hunted game, bountiful local sea fare, and handcrafted local wines offer farm-to-table experiences with a unique sense of place.

Prepared with reverence for the local history and culture, fresh Olympic Coast Cuisine is best enjoyed amid the beautiful scenery that surrounds the Olympic Culinary Loop.

While these are trying times, the 'LOOP' remains a delicious destination for authentic seafood. We invite you to explore and taste what the Olympic Coast offers as you Eat Local First - Olympic Peninsula!

A year-long effort to find the quintessential Olympic Peninsula Chowder will culminate at this weekend’s Dungeness Crab & Seafood Festival.

The 18th annual CrabFest — scheduled for Friday, Saturday and Sunday at City Pier and in the parking lot of the Red Lion Hotel at 221 Lincoln St. — will host this year Olympic Culinary Loop’s final chapter in finding and honoring the seafood chowder that best exemplifies the Olympic Peninsula.

The judging of the champion chowder will be at about 3:30 p.m. Sunday in the Front Street Gateway Center Pavilion.

“No longer will the Pacific Northwest-minded foodies be limited in their ordering to chowders named ‘New England,’ ‘Manhattan,’ or seafood Cioppino hailing from San Francisco, or to Jambalaya influenced by Louisiana,” Olympic Culinary Loop's Shively said. “Once crowned, the winning Olympic Peninsula Chowder is destined to be on menus and taste buds from coast to coast” .

The chowder championship is one of many foodie events planned for CrabFest.

The main event is the crab dinner fest. More than eight tons of Dungeness crab pulled from local waters will be delivered to the plates of festivalgoers in the Crab Central tent all three days. The crab will be served with fresh corn and cole slaw.

Tickets for the full Crab meal are $30 and can be purchased in advance at CrabFestival.org. Military personnel with current active ID will pay $26 for a special crab dinner all weekend and receive 10 percent off on merchandise. Special discounts for Friday and Sunday Crab Dinner tickets can be found online.

Inside Crab Central - and out along the pier - will be other restaurant booths, adult beverages and live music.

Featured chefs include pie maker and author Kate McDermott of Port Angeles, who will offer a demonstration Saturday, and “Wild” Bill Ranniger, corporate executive chef for Duke’s Chowder Houses, of Seattle, who take the stage Saturday to reveal the secrets of creating Tempting Thai Ginger Cod in a Coconut Milk Broth and return again at 11:30 a.m. Sunday to prepare Pan-Seared Wild Alaska Salmon.

McDermott’s cookbook, “Art of the Pie: A Practical Guide to Homemade Crusts, Fillings, and Life,” was nominated for a 2017 James Beard Award in Baking and Desserts. In 2018, she released her second cookbook, “Home Cooking.”

McDermott will sign copies of both her books after her Saturday presentation.

Ranniger began his tenure with Duke’s as a chef in 1995, then rose through the ranks from general manager to regional manager to executive chef, a position he has held for the past 15 years.

With restaurateur Duke Moscrip, Ranninger co-authored the 2016 cookbook, “As Wild As It Gets … Duke’s Secret Sustainable Seafood Recipes.”

Don't limit your inner Bunny to a basket of stale marshmallow chicks. Plan a spring trip to the Olympic Culinary Loop, where you'll find food, lodging and plenty of great activities awaiting!

A wonderfully delicious invitation to nibble your way across 50-miles of the Olympic's Strait of Juan de Fuca featured in the January 2018 issue of Upscale Living Magazine by travel writer Tracy Beard.  Congratulations to these LOOP locations mentioned as "MUST" stops along the journey:

Don't drool on your screen while reading the full article!

There are several types of mushrooms found wild in the Northwest and even on the Olympic Peninsula. Locally Chanterelles, King Boletes (Porcini) , Oyster Mushrooms, Morels, Lobster Mushrooms and more are wild harvested. Two great opportunities to learn all about and to taste these seasonal salutes to Fall: [caption id="" align="alignnone" width="343"] 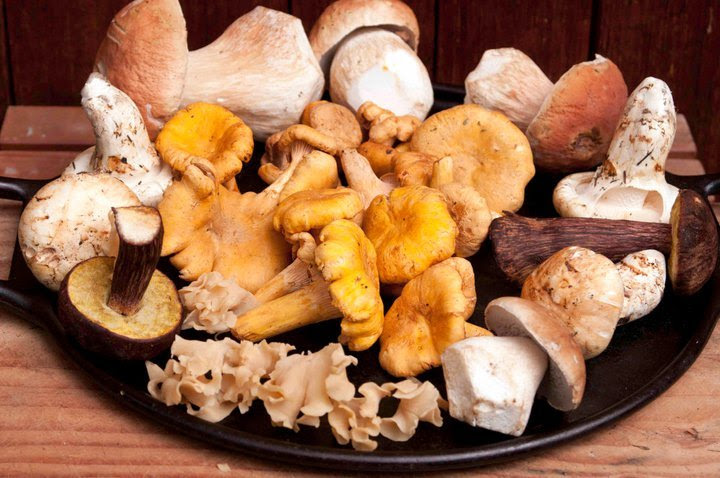 As always Michael's will be pairing these with tasty ciders, wines, beers, and spirits. Reservations encouraged, 360-417-6929. The buffet will be featuring mushroom specials in celebration of the Mushroom Festival. 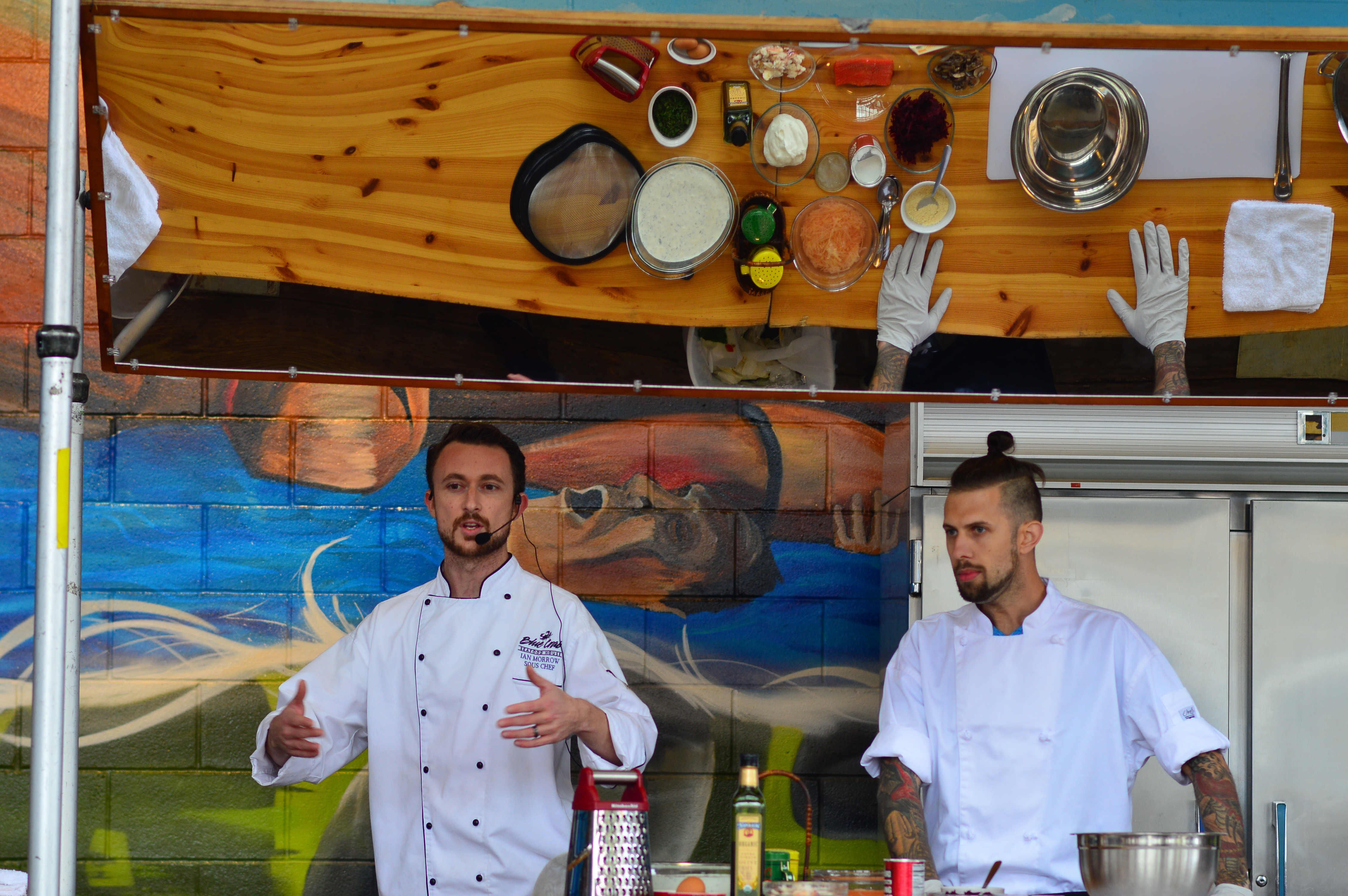 Cooking demos are an annual crowd favorite at the Dungeness Seafood & Crab Festival in Port Angeles Laurette of Sweet Laurette''s Cafe and Bistro shared her talents with us, along with Chef Ashley of Kalaloch Lodge, and Chef Dan of Resort at Port Ludlow.  This year we'll welcome Lissa from Hama Hama Oysters and maybe you!  Sign-up fast as only a couple of cooking demo slots remain.
Full details and an imbedded RSVP form on-line 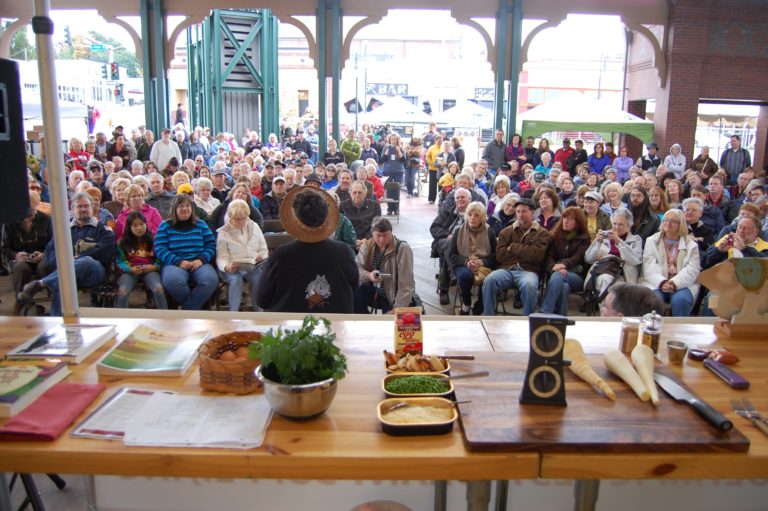